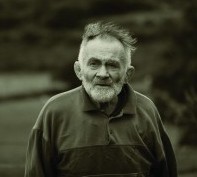 In an era of hard times and hard men, cyclist Mick Murphy was known as ‘The Iron Man’. Truth exceeds legend: he trained with weights made from stone; he made a living as a spalpeen and circus performer; in the 1958 Rás, when his bike broke down, he ‘borrowed’ an ordinary bicycle from a farmer and chased down the leading pack; he rode for 3 days with a broken collar bone; drank cow’s blood and ate raw meat. He was said to be indestructible.

Artist/filmmaker Chris Hurley is the conduit for a re-telling of the events leading to his greatest moment, winning Ireland’s toughest cycle race.